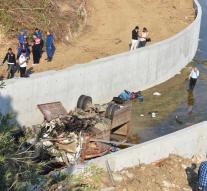 istanbul - Nineteen migrants were killed in western Turkey when the truck they were in was crashing. Five people were injured according to Turkish media, including the truck driver.

The car was on its way to Izmir and was hit by the unknown cause of the road and turned upside down. The victims would be illegal migrants on their way to Europe. It is not known where they came from. Turkey has included 3.5 million refugees from neighboring Syria alone.

On Saturday, ten people, migrants and smugglers, lost their lives in a car accident in northern Greece. The minibus where she collided with Kavala at the front of a truck and caught fire.