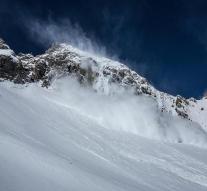 - In an avalanche on Sunday nine people died in northwestern Tibet. Also more than 350 sheep and 110 yaks were slain by the snow mass.

The victims are shepherds and lived in the Dungru village in the Ngari region of the Himalayas, where many tourists to find.

Global warming and the extremely hot summer are cited as reasons for the rate at which the glaciers in Tibet to be melting. It is feared that in the coming time more villages will be affected by avalanches.