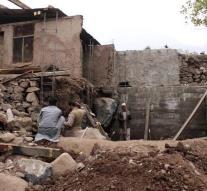 muzaffarabad - Indian shelling in the border area between India and Pakistan on Wednesday to at least nine people killed. Eleven people were injured. In a village at about one hundred kilometers from Muzaffarabad, the capital of Pakistani Kashmir, a bus was hit, inform the Pakistani authorities.

The attack may be a retaliation for the deaths of three soldiers on the side of the Indian Army who were ambushed. Tensions between the two countries have recently been running high. One of the main bones of contention is the Kashmir region, which claim both countries.