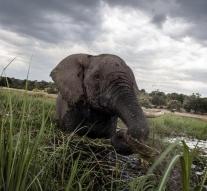 gaborone - SHOCKING PHOTOS- At the village of Dukwi in Botswana nine elephants are killed by a high voltage cable. The animals wanted to drink water at a leaking pipeline. In addition, they drew the mast of an electricity line.

Please note that the pictures at the bottom of this message can be found as shocking.

The cables came down 3 meters, which corresponds to the average height of an African elephant. The animals became entangled in the cables and came under power.

With approximately 150,000 copies, Botswana is the largest population of African elephants. The country is about as large as France.