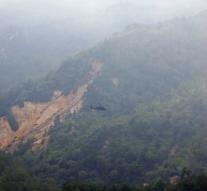 tokio - In Japan, all nine occupants of a helicopter were killed by a crash. The aircraft crashed on the island of Honshu, rescue workers have salvaged the bodies on Saturday. The cause of the crash is still unclear.

The Bell 412 helicopter had left to inspect a climbing route in the mountains near Nagano and Niigata. Less than an hour after the start, the plane disappeared from the radar. The wreck was found in a wooded area.

Last November, a helicopter from the same airline crashed, killing all four passengers.