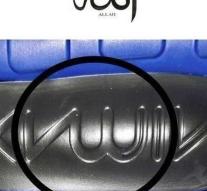 beaverton - Nike has withdrawn its Air Max 270 model under pressure after a Muslim petition started an online petition. According to her, in the design of the sole in Arabic the word Allah was recognizable.

According to the Muslim woman, Saiqa Noreen, this design was blasphemous, because with this the name Allah would be caught, kicked and would be smeared with mud and other dirt. She demanded that the shoe be returned.

Nike said that it was a styled feature of the Air Max and refuted the accusation that the shoe brand had deliberately insulted Muslims.