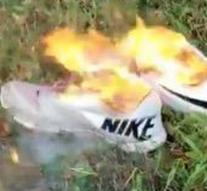 washington - The American-born sportswear giant Nike has taken the anger of a part of the American population. Nike's decision to give American Football player Colin Kaepernick an important role in a new advertising campaign is being tormented and denounced on social media.

The 30-year-old former quarterback of the San Francisco 49ers was the first player in 2016 to kneel and raise his fist while playing the American national anthem. That protest against excessive police brutality against black Americans received a lot of imitation, much to the dismay of President Donald Trump.

Particularly in conservative circles an angry response to the action of Nike, report American media. A lot of messages can be found on social media under #boycotnike. Photos and videos of people who light their Nike shoes or cut the world-famous logo of their socks also appear. Others could appreciate the action of Nike, according to the many congratulations to the address of Kaepernick.

Trump regularly went out on Twitter to the kneeling players. According to him, they showed no respect for the flag and fatherland and earned nothing less than dismissal, the president thought.

Read more under the photo