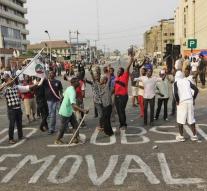 - Members of the Nigerian trade union NLC have halted Wednesday in protest against planned increases in fuel prices. The judge had actually banned the strike.

Although several members have filed work, most companies and government offices were open as usual.

In the capital Abuja were about three hundred NLC supporters to the streets to demonstrate, in Lagos there were even fewer. There, too, the shops and banks were not closed. The TUC trade union looked after the ruling of the judge of the industrial court on a work stoppage indefinitely.


The government's tax measure would represent a price at the pump of about 65 percent, intended to alleviate the worst poverty in the biggest crisis for decades in the major African economy.