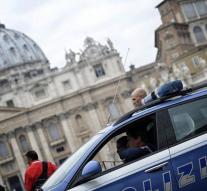 rome - The death of a Nigerian asylum seeker Wednesday in Rome is considered by Italian police as a crime of racism. The 36-year-old African was slain Wednesday in the streets of the Italian capital when he shot his partner to help was treated racist. The culprit is probably an Italian known in town for its right radical views.

The Italian was the Nigerian who fled his country because of terrorist group Boko Haram, have beaten to death. An Italian aid organization for asylum seekers responded sad.,, He has fled a war to be killed abroad, '' says founder Don Vinicio Albanesi Copa Darco where the couple had been given shelter. He spoke of a,, clear case of racism. '