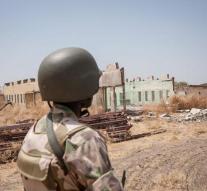 lagos - The Nigerian army has arrested Khalid al-Barnawi, the leader of the militant Islamic organization Ansaru. That is a splinter group of Boko Haram, which has been accused of abduct and kill Westerners. The US State Department said al-Barnawi in 2012, one of the three Nigerian leaders on the black list with links to Boko Haram and the African branch of al Qaeda.

Military spokesman Rabe Abubakar said that al-Barnawi arrested in Lokaja, capital of central province Kogi.,, This is a great step in the right direction, '' said Abubakar. He also reported that some fighters from Boko Haram has surrendered.