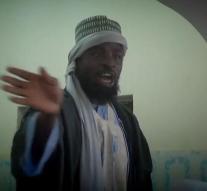 abuja - The Nigerian Air Force has mortally wounded the leader of the extremist movement Boko Haram. Some other Boko Haram leaders have been slain, claims the Air Force.

Government aircraft bombarded the Muslim extremists Friday Taye, a town in the northeastern state of Borno in Sambisawoud. In addition,, was their leader, called Abubakar Shekau, fatal injuries '', the Air Force announced.

The Nigerian army claimed on several occasions earlier that Shekau was killed, but seemed always to counter new video messages. Boko Haram has not yet responded to the claim of the Air Force.


Shekau faced not only in the last weeks of the government army attacks, but also with dissension in their own ranks. Terror movement Islamic State, which Shekau has sworn allegiance, recently appointed a new Boko Haram leader.