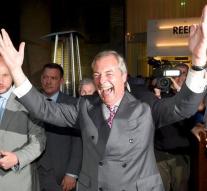 - With the departure of Nigel Farage, leader of UKIP UK loses most controversial but also the most influential politician in the country. Without Farage was indeed never been a referendum on the 'independence' of the United Kingdom. The Brexit has achieved his political dream.

Nigel Farage is a wonderful politician. He dong many times for a seat in the House of Commons. Never He managed to overcome the high barriers of the British constituency system. Even last year, when his UKIP took almost 15% of the vote, and he was eligible in a district which was rare Eurosceptic, not he managed to trump an unknown Conservation candidate.

It does not matter. At the main election of the last forty years, the EU referendum- Farage drew the longest straw. Tirelessly he traveled in recent years from room to room, and from bar to bar, to sing the democratic deficit in Brussels. He did it with a cheerfulness which was appealing. He hammered constantly by the indomitable power of immigrants. It was this message that the British finally convinced that it was better to leave the EU.


Farage was also controversial. Even in his own party. Ukip-founder Alan Sked, a professor at the London School of Economics, said Farage, a racist political failure. ' Douglas Carswell, the only member of the House of Commons for UKIP, tweeted a smiley face after the announcement of the departure of Farage.

Farage has a background as an investment banker. Since 1999 he is in the European Parliament. There he made for almost twenty years of continuous consternation. Just last week by declaring that none had had some of his fellow parliamentarians 'ever' a normal job. There he also said he was laughed at when he took office for his anti-EU rhetoric. He did not even tell that he who laughs last, laughs loudest. And nobody laughing as hard as Nigel Farage. The broad grin for the rest of his life, Farage is only 52, do not disappear from his face.