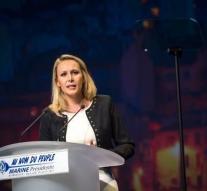 Marion-Maréchal Le Pen would say goodbye to politics for personal reasons. She had already told her that she did not want to devote her entire life to politics.

The Front National politicians were elected in June 2012 at the age of 22 in the National Assembly as the youngest French parliamentarian ever. She is a granddaughter of Jean-Marie Le Pen. Marine is her aunt.

Marine Le Pen lost Sunday in the second round of the French presidential election of social-liberal politician Emmanuel Macron. In June, the French will elect a new parliament.