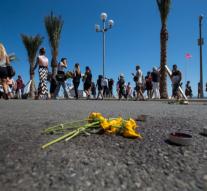 - One in the attack in Nice on July 14 injured man Thursday yet succumbed. The death of the 56-year-old Pierre Hattermann brings the death toll to 85, local newspaper Nice-Matin writes.

The attack in the southern French resort was Hattermanns wife and thirteen year old son all fatal immediately. Fourteen-year-old daughter is still in the hospital but is now starting to recover.

On the evening of the French national holiday was driving the 31-year-old Tunisian Mohamed Lahouaiej Bouhlel on the boulevard in Nice with a truck on party people. Bouhlel was shot dead by the police on the spot. Six possible accomplices are still in custody. According to the extremist movement Islamic State Bouhlel acted as a 'soldier of IS.