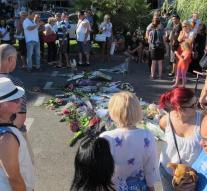 - Three days after the attack in Nice are still eighteen wounded in critical condition, including a child. That the French Health Minister Marisol Touraine said Sunday.

In total stay 85 more victims in hospitals, 29 of them are in intensive care. In the southern French city Thursday 84 people were slain when driving a 31-year-old man with a truck deliberately on the Promenade des Anglais on the crowd. More than three hundred people were injured.