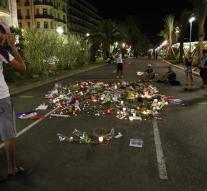 - Mohamed Bouhlel, the Frenchman who is responsible for the massacre in Nice, has struck just before he sent a text message with the request for additional weapons. To whom he sent the message is not clear.

'Bring more weapons. Bring them in 5 minutes C. ', according to state read the French channel BFMTV in the SMS that was sent to 22. 27 hours. The recipient would be one of the persons arrested in the investigation into the massacre.

French police Sunday arrested a man and a woman in connection with the attack.