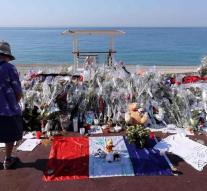 - Mohamed Lahouaiej Bouhlel, last week on the promenade in Nice 84 people ran over, looked at his computer 'very violent' pictures of radical Islamic websites and looked at articles about previous attacks such as those in Orlando and Paris.

He also read an article about a man who had been run on a packed terrace in Nice. That prosecutor Francois Molins said Monday during a press conference. Bouhlel sought include the words 'terrible accident', 'fatal accident' and 'shocking videos. He also studied the Quran and he sought religious songs.

According Molins left Bouhlel eight days before the attack his beard. By acquaintances, he said he did it for religious reasons.


Earlier, the Frenchman of Tunisian origin had never shown such an interest in his religion. 'He ate pork, drank alcohol, used drugs and had a varied sex life,' said Molins.

A witness told the police that Bouhlel had said during a conversation about beheading videos of IS which he was already accustomed to it. In another, he had stated that he could not understand why IS could not claim his territory. Several people, including his wife, talked about his violent behavior.

A direct link has not been established by researchers with Islamic State or any other terrorist organization. Nevertheless, his actions before the law can be described as 'terrorism', said the prosecutor.

Meanwhile, there are still 74 victims in the hospital. 28 patients are in intensive care, 19 people are still in danger.

Not all victims are identified. 71 deaths have now put a name and there are 52 death certificates. Monday morning, the first body was handed over to the family.

It was previously known that his act Bouhlel thoroughly prepared. So he explored twice the pedestrian area where he wreaked carnage in the days before the attack. According Molins he made there several photos, including selfies.

Six people are still in custody and interrogated for their role in the massacre. Police suspect that they helped Bouhlel example by supplying weapons to him. In a sms'jevlak for his deed to one of them he wrote about buying a handgun.

Mohamed Bouhlel had a criminal record and was known to the police for theft and assault, but he was not on the radar of intelligence. Terror group Islamic State called him a soldier.

His sister said he was in the years before his departure from Tunisia to a psychiatrist. The psychiatrist, Chemceddine Hamouda, said his parents Bouhlel in August 2004 volunteered at his clinic in msaken. He was aggressive and was not happy with his body.

After his departure for France Bouhlel left little themselves heard in 2005. In recent weeks, he called more often with his brother.,, He asked how it was with our parents. He sent lately small amounts, 300 or 400 euros, and mobile phones. ''