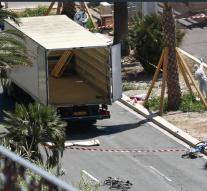 - Thirteen people who were killed Thursday in an attack in Nice, have not been identified yet.

This confirms the Paris prosecutor Francois Molins Monday during a press conference.

He also reported that the 31-year-old perpetrator, Mohamed Lahouaiej Bouhlel recently searched for online propaganda of the Islamic State and the shooting in Orlando early June.


Earlier it was announced that the Tunisian his act, in which 84 people died, had prepared thoroughly life. He had pedestrians sin on the previous two days exploring multiple times.

Bouhlel had a criminal record and was known to the police for theft and assault, but he was not on the radar of intelligence. According to the French Prime Minister Manuel Valls he was radicalized as possible in a very short time. Terror group Islamic State called him a soldier.