Home / World / New Zealand: tens of thousands without power due to storm 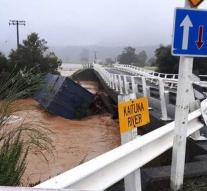 wellington - Due to a violent storm, a state of emergency has been declared in parts of New Zealand. Cyclone Gita roamed the South Island on Tuesday evening (local time). Trees and high-voltage pylons were destroyed in many places. Tens of thousands of people are without power.

The airline Air New Zealand canceled all flights at the airport of the capital Wellington. Schools and several roads on the South Island are closed as a precaution. Due to the heavy rainfall, streets in Christchurch fell, even before Gita had landed. Residents from lower areas were advised to look for another person.

The state of emergency is also in force in Christchurch, the second largest city in the country, located on the South Island. A total of seven districts were affected. According to the authorities, the exact extent of the damage is known only on Wednesday morning.