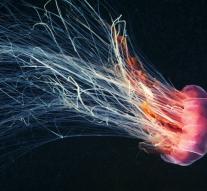 - The New Zealand coast is flooded by huge masses of jellyfish lion and desmonema programs. Over a distance of hundreds of kilometers both countries jellyfish species on the coast of the South Island and the North Island.

Scientists attributed the phenomenon to the rise in sea temperatures. Moreover jellyfish find more than enough food in the ocean and the conditions to reproduce according to marine biologists excellent. There are regularly new species of jellyfish discovered.

The lion jellyfish is the largest species in the world. He may have a diameter of 2.5 meters and a length of 35 meters. Except in the Pacific it is found in the northern Atlantic Ocean.