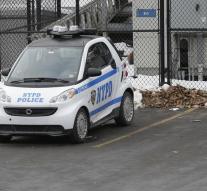 - The former police commissioner of New York ' she called microcars '', but that did not stop him from introducing them on the streets of New York. 150 compact and striking two-seater Smart Fortwo-taking in the fleet of police in the place of the no less striking three-wheeled scooter. 75 new ones soon strengthen the corps, the New York Times reports.

Just as the tricycle is the white-blue Mini a peculiarity in by powerful vehicles dominated fleet of the New York Police Department (NYPD). But the new little brother has some dashes for its big brother, the traditional patrol car. So the Smart is more secure, easier to manage and cheaper.

Another positive side effect is that small cars icebreaking in a period of low crime rates, which the police want to show a friendly side of himself.