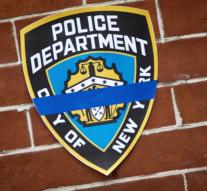 - The NYPD is looking for a 22-year-old man who robbed a 4 year old girl. His name: Pablo Escobar.

The twenties who has the same name as the 1993 deceased Colombian drug baron robbed the girl Friday in a laundromat in Queens. On image from a security camera shows that Escobar at the entrance stoops to talk to the child. He snatched during this short conversation the gold chain from her neck.

The police at the man looking and therefore has released his latest mugshot. This was made on July 22, when he was arrested on suspicion of Internet fraud.