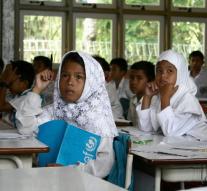 - The Indonesian city of Banda Aceh, the predominantly Muslim population, banned old and new to celebrate. 'It is forbidden for Muslims to celebrate the Christian New Year,' said Deputy Mayor Zainal Arifin from the news Tempo.co.

Banda Aceh is the capital of Aceh, the only province in Indonesia, where Islamic law applies. The authorities of the town residents had also banned last week to celebrate Christmas.

According to the deputy mayor may be Muslims celebrate Islamic New Year. It has a different calendar. He also found fireworks and trumpets at the beginning of the new year incompatible with Islamic culture.