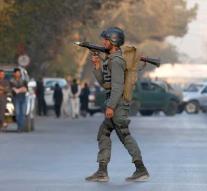 kabul - The Persian New Year started in the Afghan capital Kabul with a series of explosions and at least six deaths. About 23 people were injured, said a spokesman for the Ministry of...

The lectures on the cause of the explosions vary. According to a police spokesperson, three bombs went off in the west of the city, which also has an important Shiite shrine. A spokesman for the Ministry of Defense held it on missiles that had been fired.

In some Muslim circles, the celebration of the New Year is considered pagan.