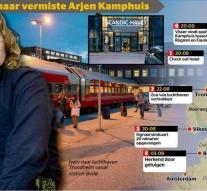 oslo - The Dutchman Arjen Kamphuis, who was missing in Norway, was seen on 30 August in company of two men in Vikesa, in the southwest of the Scandinavian country. That's what a witness told the Norwegian newspaper VG.

Kamphuis has been missing since August 20. The disappearance is, in view of the signals that have been received, enormously enigmatic. The new witness does not change that: on 30 August, telephone signals from Kamphuis were also collected in Vikesa (Point 3 in the illustration).