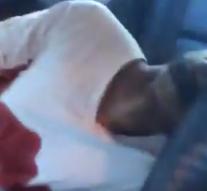 - Again in the US turned up a video of a black man who was shot dead by police. Reported that British and American media. The video is distributed by the girlfriend of the man. That would be Wednesday in a suburb of Saint Paul in Minnesota have been shot dead in his car when he wanted to get his license.

The incident follows the shooting Tuesday in the city of Baton Rouge, where a 37-year-old black man was shot dead by police. The shooting has caused outrage.

The new video made by the girlfriend, shows the motorist Philando Castile in a pool of blood. He would when he was arrested by police, told that he had a gun license and that he had a weapon. Police have confirmed that one person was shot dead by a policeman.