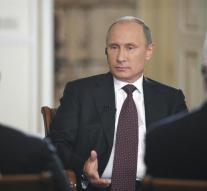 moscow - The US and Russia will better coordinate with each other their military operations in Syria. Senior military officials from both countries have agreed to, as the Kremlin reported Sunday.

The soldiers discussed the situation during a videoconference. The countries had already agreed on the flight over Syria, where they are both active. These appointments were made after several cases in which a Russian plane came within a few miles of a US jet.

The US Department of Defense has asked Russia on Saturday to ask airstrikes against Syrian rebels supported by Washington. According to the US Moscow had not listened to American warnings.