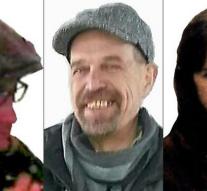 - There may be a new track that indicates that the three fugitive perilous RAF terrorists and robbers sitting in the Netherlands.

This confirms spokesman Lutz Gaebel of the public prosecutor in Germany to De Telegraaf. 'We're going in the short term with the Dutch police tell us more about this suspicion,' says Gaebel.

The new track is probably the result of the current investigation into a robbery in June in Cremlingen, which is attributed to the RAF trio. There was 600. 000 were captured.


In early June, the Telegraph revealed that the RAF terrorists suspected of extremely violent robbery, is possibly hiding in the Netherlands. A mobile phone trail led to our country.

It involves Ernst-Volker Staub, Burkhard Garweg and Daniela Klette. They have made probably committed between 2011 to 2016 in six violent attacks on supermarkets and two CIT in Wolfsburg and Cremlingen.

Police warn that the three are dangerous firearm. The RAF, the Red Army Faction and the Baader-Meinhof Group, was a left-wing extremist terrorist group. From the seventies the RAF staged in Germany bloody attacks. In 1998, the group disbanded.