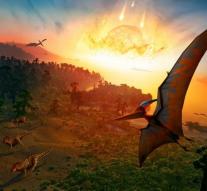 tokyo - Japanese researchers have developed a new theory about why the dinosaurs became extinct. A huge meteorite impact in Mexico continues to be the cause, but the meteorite would have fallen into a large oil reservoir with other consequences.

Until now it was assumed that a lot of sulfuric acid was placed in the atmosphere by a 'dry' weft. These particles reflected sunlight to total darkness, acid rain and global winter due. Plants died and then also the animals. The researchers argue that this can not be, because all animals, including extinct crocodiles.

The consequence of a weft in an oil well is different. The oil would be burned at high temperatures and soot are released into the atmosphere, which spread worldwide. This has caused a temperature drop of 6 to 9 degrees and less precipitation. As a result, there plants and animals extinct, but some species could still survive.