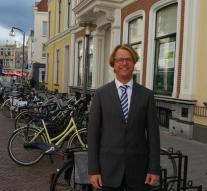 hoofddorp - There are thousands of 'bicycle part' in major cities of the Netherlands in. Who reserve and pay through an app on the smartphone. It costs 6 euros per day or 26 euros per week.

Next week starts a trial in Hoofddorp with UwDeelfiets, an initiative of former Connexxion manager Maurice van der Meché. He is in talks with partners in the public transport, but also with municipalities and companies that want to offer travelers and personnel transport from door to door.

'We use abandoned bicycles that are not retrieved by owners. In sheltered workshops they are refurbished and equipped with a smart lock with GPS and beep. Which communicates with the free app and Google Maps, so they can be found quickly. We park the bikes clearly identified with signs and stickers on fixed public places, 'said Van der Meché.


Users need According to him, only a mobile phone and credit card. 'The app can be set start and end time of hire and bicycle lock are opened and closed. We ask no further ID, subscription or smart card, such as NS-bikes. Also, we use no counters, so there are zero waiting time. '

The test in Hoofddorp 25 shared bikes have Van der Meché show where it goes wrong operation. 'We can then improve before this year we are active in the Netherlands in cooperation with our partners. '

In several other European metropolises, there are similar initiatives, which often operate on him with expensive special posts or garages. 'The disadvantage is often that people need to identify and physically can not book in advance. '