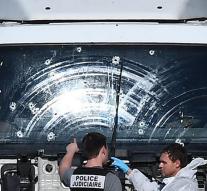 - The French Justice has a new suspect arrested in connection with the attack in Nice. It's about the 36-year-old Hamdi Z together with the perpetrator of the attack, Mohamed Lahouaiej Bouhlel, made a selfie. Hamdi Z was already held on July 25. According to justice the two men had been over a year contact.

On July 14, was driving the 31-year-old Tunisian Bouhlel on the boulevard in Nice with a truck on the party people. There were 84 people killed and Bouhlel were carried shot dead by police.

The detention of Hamdi Z. there are now six people determine who would have been involved in the attack.