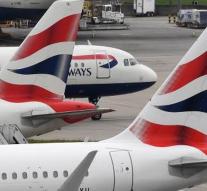 the staff disagree with ba's decision to remove travel benefits for employees who earlier this year - Cabin crews from British Airways (BA) are threatening to lay down work on June 16th.

The staff disagree with BA's decision to remove travel benefits for employees who earlier this year campaigned for, among other things, higher wages.

Trade Union Unite mentions the punishment of staff who use his right of strike, 'a culture that can not accept.' Earlier, BA and the union reached agreement on higher wages, but because of the deletion of benefits, they have not bound this proposal yet Submitted to the members.

The strike threat follows the computer failure, causing BA to cancel many flights. As a result, 75,000 people were dumped. The failure also put pressure on the airline's cost-savings program. The cost of the malfunction is estimated at 100 million euros.