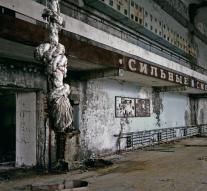 - The new shell for the heavily damaged Chernobyl nuclear power plant, which caused a meltdown in 1986 for an unprecedented environmental disaster, is almost ready. As a giant steel beetle crawls the largest movable structure in the world on the ruins of reactor 4 through. In a few days, the 36,000-ton structure in place. On November 29, the handover.

'This is the beginning of the end of the struggle against the consequences of the catastrophe that has now lasted for thirty years,' said the Ukrainian Environment Minister Ostap Semerak. The dome is applied to prevent over a hundred years that there are still escaping radiation. The old concrete sarcophagus, which after the disaster on the exploded plant was laid showed cracks. This required action. For the financing needed foreign aid.

The final cleanup of the devastation and the fuel rods under the new roof is technically possible, but it is a dangerous and expensive task. Experts suggest that there are about 200 tons of enriched uranium is present at the scene.