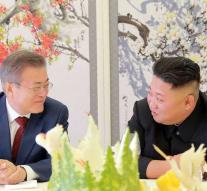 seoul - North and South Korea have made new agreements to further reduce the tension between the two countries. For example, both countries will dismantle eleven border posts before the end of next month and form a military team that will investigate further measures.

Furthermore, another joint team will investigate whether the mouth of the river Han can be released for civil shipping. The river forms part of the border north of the South Korean capital Seoul.

The measures are the result of new discussions that have recently taken place.