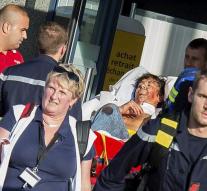 brussels - The Belgian police Tuesday seven houses in Brussels and Antwerp invaded in connection with the foiled attack on the Thalys train from Amsterdam to Paris last summer. No one was arrested but a number of objects,, 'was seized. No explosives or weapons were found, the Prosecutor's Office reported.

The action follows raids Monday in and around Brussels in which six people were taken in for questioning. They were all later released.

A heavily armed 25-year-old Moroccan stepped on August 21 at Brussels Midi Station aboard the Thalys from Amsterdam. Thanks to the intervention of three American soldiers, the man could be overpowered near the French border and prevented that he prepared a bloodbath. The soldiers were previously distinguished both in France and in the US.