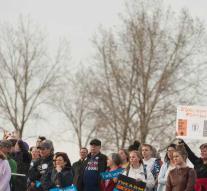 littleton - Thousands of high school students and students in the United States have taken to the streets again on Friday to argue against firearm violence and the simplicity with which firearms can be purchased.

The students put pressure on politicians with a series of protests in the run-up to the 6 November elections. Then the House of Representatives and a third of the Senate are elected.

The 20th April is notorious for the shooting in a school in Colorado in 1999. Then two secondary school students shot twelve fellow pupils and a teacher dead before they turned away. This massacre at the Columbine High School became symbolic of the firearms dramas. It was the bloodiest drama in the US with firearms at a high school until the shooting in mid-February this year in Florida. Then an ex-student in the Stoneman Douglas High School shot seventeen students dead. This led to the youngest wave protests against firearm violence.