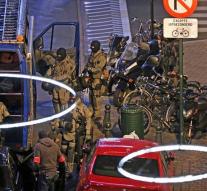 brussels - The search in Brussels Sunday evening was focused on a new prime suspect in the investigation into the attacks in Paris last month. Possibly it is a terrorist who coordinated the attacks by telephone from Brussels.


According to the
Antwerp Gazette called the Parisian terrorists to two phones in Brussels. Those phones were in the same location. The identity of the person with whom they are called, is still unknown. This person would have played a leading role in the attacks.
At the
raid Sunday evening arrested two people, reports
The standard. It would have two brothers. Neither of them would be the new prime suspect, but they would be 'linked' in him.
NEW