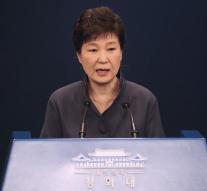 seoul - South Korean President Park Geun-hye has appointed a new prime minister and a new Minister of Finance. The appointments come at a remarkable time, since the female president is involved in a scandal. She has admitted that she has a girlfriend insight into confidential documents. They also would have favored her friend.

Opposition parties are angry because they want to be involved in the appointment and because they believe that the president is trying to divert attention from the scandal. Appointments are also seen as an attempt to restore confidence in its government.

Kim Byong-joon, political adviser under former President Roh Moo-hyun, the role of prime minister should take over Hwang Kyo-ahn. Incidentally, this is primarily an administrative function.

Yim Jong-yong, the new Minister of Finance. He was chairman of the Financial Services Commission and takes on the function of Yoo Il-ho.