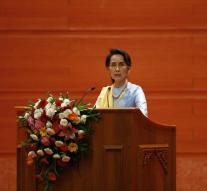 naypyidaw - In Myanmar Wednesday's new peace talks began to put an end to one of the longest armed conflicts in the world.

The consultation between the government and various rebel groups is led by Nobel Prize winner Aung San Suu Kyi and takes place in the capital Naypyitaw. The 71-year-old Suu Kyi has been the leader of Myanmar since April 2016.

The peace talks last four days. The conflict has existed since the country separated from Britain in 1948. Some autonomous regions also came under the authority of the new government. These regions say years have been exploited and suppressed, partly because of the soil taxes.