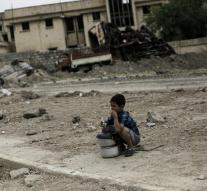 baghdad - Iraqi troops have begun a new offensive at the Iraqi city of Mosul, which is partly owned by Islamic State (IS). Two major military sections attack the city from the northwest, according to a spokesman for the army.

Since October, fought Mosul, the last bolware of IS in Iraq, has been fought. Out of major parts of the city IS has already been expelled. The militants are still in the historical part of the west of the city. It is estimated that there are only three hundred IS warriors.