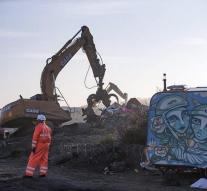 - Refugees who are still traveling to Calais, are no longer recorded and taken to official shelters. The city and the department of Pas-de-Calais were responsible for the transportation and referral of the 6,000 residents of the main camp. However, that process is completed.

'It is not the role of Calais to catch the migrants from Europe,' said Fabienne Buccio Thursday, the prefect of the department. While the last buses with refugees left elsewhere, came forward again new refugees wishing to Britain from Calais. These people are asked 'to spread. '

Authorities are working to clean up the remnants of the camp 'the Jungle'. Buccio expected Monday that job is done.