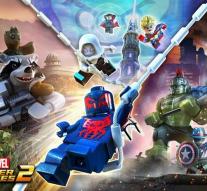 - Warner bros. And TT Games have announced Lego Marvel Super Heroes 2. The famous superheroes and villains. Players take it against time traveler Kang the Conqueror in an epic battle of ancient Egypt and the Wild West to Sakaar and New York in 2099.

On the way, players can crawl some iconic characters from Cowboy Captain America from the past to Spider-Man 2099 from the future, as well as Thor, Hulk, the Guardians of the Galaxy, Black Panther, Captain Marvel and Doctor Strange.

'With a complete original story, Lego Marvel Super Heroes introduces amazing new gameplay features, including the ability to manipulate time and compete four-player superhero combat mode,' said Tom Stone, managing director at TT Games. 'With a huge list of brand new characters from the Marvel universe, including old favorites in new characters, this game will appeal to both Lego and Marvel fans as well as new players. '

Lego Marvel Super Heroes 2 is available from November 15 for the PlayStation 4, Xbox One and PC. At the end of the year, the video game will also appear for the Nintendo Switch.