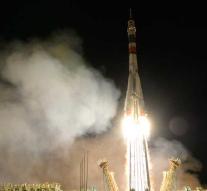 moscow - A Russian Soyuz rocket was launched from Kazakhstan on Thursday evening to the international space station ISS. Two of the three astronauts aboard the Soyuz had to complete their…

The two astronauts who would also go to the ISS in October are the Russian Aleksej Ovchinain and the American Nick Hague. The crew then had to abort the flight due to technical problems and make an emergency landing on Earth. Ovchinain and Hague remained unharmed. The third astronaut is Christina Koch.