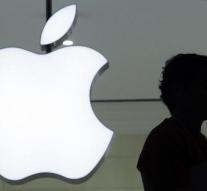 cupertino - Apple presents the latest iPhone on Tuesday, September 12th. That reports Mac4Ever.com. The site is based on mobile providers who would already have received a notice of the meeting.

The date is not very surprising. Apple always presents its iPhones in September, and the press releases of the company are always on Tuesdays. The pre-sale always begins a few days after the presentation and a week later the device should actually be on the market.

The name of the new device is not yet known. Apple released the iPhone 7 and 7 Plus last year. According to the company's schedule, the 7S and 7S Plus are now turning, but they may be skipped. In that case, Apple would present the iPhone 8 and 8 Plus. There may also be a third variant this year, which would be larger.

Apple is also working on a new OS, iOS 11. It is not yet known when it comes to market.