Home / World / New incident between US and Iran 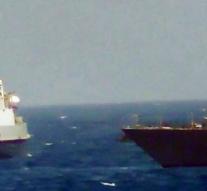 The helicopter had fired a light ball, according to the message. The Revolutionary Guard spoke of a 'provocative and unprofessional action' of the American armed forces.

Last Tuesday, a ship from the American Navy had released a warning shot when a vessel of the Garde had come to close proximity. It was the first incident since President Donald Trump took charge in January, US officials said.

Years of Mutual Enemy Shed off when Washington lifted sanctions against Tehran last year as part of an agreement to curb Iran's nuclear ambitions. However, serious disagreements remain on Iran's ballistic missile program and the conflicts in Syria and Iraq.