Home / World / New home for hundreds of elephants in Africa 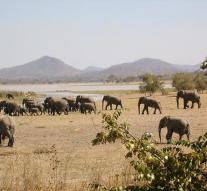 nkhotakota - 500 African elephants in Malawi is to get a mega move. Never before were moved so many elephants at one time. The operation is financed with Dutch money and occurs because the current reserve is overpopulated.

According to CCTV Africa, an initial group of 250 elephants to an empty poached wildlife park relocated about 400 kilometers away. The mega move will cost 1.6 million euros and is funded by the Dutch Postcode Lottery. The first part of the move takes seven weeks. Elephants move than the overcrowded National Park Liwonde to the empty poached Nkhotakota Wildlife Reserve.

The elephants are anesthetized for the move from a helicopter, before being hoisted up truck. The animals remain slightly conscious. Also, the families remain together in order to reduce the stress, report international media.


In 2017 move another 250 elephants, but the Majete Wildlife Reserve Nkhotakota to the park.

In total, the Postcode Lottery earmarked 2.6 million for 2016. The goal is together with African Parks Network to maintain the elephant population stable. In total, the African Parks manages 225 000 hectares and it ensures that the parks are better managed and protected.

The population in Malawi over the past twenty years, in particular by poaching decreased by half from 4000 to 2000 elephants. Africa has a total of currently approximately 470 000 elephants. To protect the elephant families get the Nkhotakota reserve of 16 000 hectares a fence. Also wants to help the locals near the parks to protect animals.