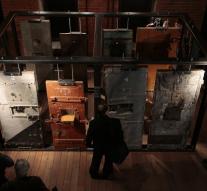 moscow - In the center of the Russian capital Moscow is Friday opened a new museum on the history of the Gulag, the infamous penal and labor camps of the Soviet era.

In the museum, including by dictator Josef Stalin seen signed documents which thousands of people were sent to the camps. Also, there are nearly one hundred interviews with relatives of victims. In the gulags millions of people lost their lives.

" In the Soviet Union, the state terror denied for a long time. Forgotten was the only way to survive. But history can not be denied or cover ", says Lyudmila Sadovnikova, which furnished the museum.

October 30 is the day that Russia commemorates all victims of political repression, particularly the opponents of Stalin were killed during the Great Purge in 1937 and 1938.