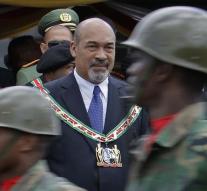 - It is still unclear how it plays out in Suriname with the lingering December 8 trial. The case will continue on Friday after the prosecutor had requested the end of June to end the process. President Desi Bouterse and 22 others are on trial for their possible involvement in the murder of fifteen prominent Surinamese in December 1982.

The prosecutor wanted to stop the process on behalf of President Bouterse. Who can give such an order on the basis of a constitutional article if national security is at risk. The case was adjourned to give lawyers time to delve into this new development.

Hugo Essed, lawyer of the families of the December murders, does not think the martial Friday make a final ruling on whether or not to stop the process.,, The lawyers will have their say on the request for abandonment. I expect the court martial will then consider, so the case will adjourn to a future meeting, '' says Essed. He reckons, however, that the court martial will finally lay down the request of the prosecutor beside him and will let the process continue.


The process has entered a crucial phase. After it was suspended in 2012 due to the adoption of a controversial Amnesty Law, the court-martial decided in early June this year anyway by putting the process. On June 30, the prosecutor would pronounce his final verdict, but Bouterse thus put a stop to.