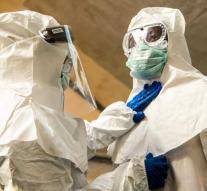 kinshasa - In the northeast of the Congo, five new cases of Ebola infection were registered one day. That has been confirmed by the Ministry of Health. According to the authorities, the increase is not only due to the constant danger that rebel groups form in the Beni region. The aid workers who try to stop the dreaded disease also receive insufficient cooperation from the population.

Many people do not trust the campaign against the deadly virus infection and sabotage the treatment and the vaccination program. 'Beni has become the new focus of the disease. Recently, many cases of infection have been detected, partly because certain families resist, 'the ministry said in a statement on Saturday.

In the provinces of North Kivu and Ituri, since July 140 patients have been admitted who have been diagnosed with ebola. In the meantime, 108 have died. A large number of inhabitants of the region are ill-informed, believe rumors or prefer to place their fate in the hands of traditional medicine men than to subject themselves to vaccination.

The World Health Organization (WHO) warned this week that the epidemic has reached a critical point because of safety problems, local distrust and geographical spread. 'We are afraid that the virus will spread to Uganda, but also Rwanda, South Sudan and Burundi are at risk,' said General Director Tedros Adhanom Ghebreyesus at a meeting of the UN Security Council.