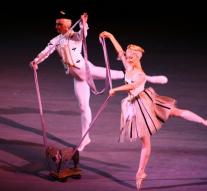 moscow - The Bolshoi Theatre in Moscow Magar Vasilyev appointed new ballet director. The 54-year-old former star dancer takes office on March 18 next year. Has announced that the board of the theater Monday.

Vasilyev will succeed Sergei Filin, who was attacked in January 2013 and had acid thrown in his eyes. The international ballet world was turned upside down by the incident. Filin was blind in one eye and suffered burns to neck and neck. It later emerged that the commission came to the assault of a dancer in the company. The motive of these Pavel Dmitritsjenko was jealousy because of a role he had not received. He received 5.5 years in prison, the executor of the attack is fixed for ten years.

Vasilyev worked as ballet director at the Scala in Milan and the Mariinskithater in Petersburg. Bolshoi 's two hundred dancers, the world's largest and most prestigious ballet company.